Huge Crowd Turns Out To Greet President Trump In Pennsylvania Dutch Town Of Lititz, The Place Where My Immigrant Forbearers Landed In 1716

President Donald Trump rallied with members of the Pennsylvania Dutch community in Lititz, Pennsylvania, thanking them for their support. 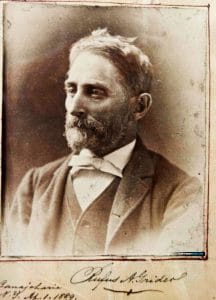 My 5-time great uncle Rufus Grider was a Pennsylvania Dutch Moravian, and the last person in my family to get saved before I did in 1991.

My childhood memories in part revolve around things like shoo-fly pie, Lebanon bologna, and Snyder’s of Hanover hard pretzels, all items you would find in the Pennsylvania Dutch community of Lititz, PA. That’s because my relatives on my dad’s side arrived to that part of what would become America in 1716, being of German Dutch descent. Our original family name was not Grider but Krauter, and many generations of our family plowed the fields, built the barns, and worked in the mills of Bethlehem Steel, with my 5-time great uncle Rufus Grider going on to become a locally significant 19-century American primitive historical artist who’s work is still in demand to this day.

Today President Trump visited the true backbone of this country, and they turned out in record numbers to enthusiastically receive him. I love my deep Pennsylvania Dutch roots, my Mennonite and Moravian ancestors, and very much appreciate the warm welcome my people gave the president today. 8 days left until the most contentious election of our lifetime takes place, are you ready for what comes next? Get out and vote for 4 more years of President Trump, or you can vote for due-date abortionists who want to raise your taxes and let Black Lives Matter and ANTIFA burn down American’s cities.

The choice is crystal-clear, it’s Trump or tyranny.

FROM BREITBART NEWS: The Pennsylvania Dutch communities are typically made up of Amish, Mennonite, Lutheran, German Reformed, Moravian, and other groups.

“They said, ‘We can’t have a man who sleeps all day … they work hard.’” pic.twitter.com/GvTLJZ4eF5

Trump turned and acknowledged a group of the Pennsylvania Dutch who attended his rally wearing traditional clothing and hats.

The group grinned as a few of them flashed a thumbs-up sign at the president as the crowd cheered. Trump recalled that, as a real estate developer, he had a business relationship with the Pennsylvania Dutch.

“Hard workers, incredible craftsmen,” Trump said, adding, “They can throw up a barn in about two days … they use the wooden cogs, they don’t use screws because they want to make everything themselves right?” READ MORE

The fake news media may be telling you that Joe Biden is “way ahead in the polls, but the story on the ground says the exact opposite.

When you contribute to this fundraising effort, you are helping us to do what the Lord called us to do. The money you send in goes primarily to the overall daily operations of this site. When people ask for Bibles, we send them out at no charge. When people write in and say how much they would like gospel tracts but cannot afford them, we send them a box at no cost to them for either the tracts or the shipping, no matter where they are in the world. Even all the way to South Africa. We even restarted our weekly radio Bible study on Sunday nights again, thanks to your generous donations. All this is possible because YOU pray for us, YOU support us, and YOU give so we can continue growing.

CLICK IMAGE TO ORDER YOUR BOX OF NTEB GOSPEL TRACTS

But whatever you do, don’t do nothing. Time is short and we need your help right now. If every one of the 15,860+ people on our daily mailing list gave $4.50, we would reach our goal immediately. If every one of our 150,000+ followers on Facebook gave $1.00 each, we would reach 300% of our goal. The same goes for our 15,900 followers on Twitter. But sadly, many will not give, so we need the ones who can and who will give to be generous. As generous as possible.

“Looking for that blessed hope, and the glorious appearing of the great God and our Saviour Jesus Christ;” Titus 2:13 (KJV)

The post Huge Crowd Turns Out To Greet President Trump In Pennsylvania Dutch Town Of Lititz, The Place Where My Immigrant Forbearers Landed In 1716 appeared first on Now The End Begins.

Digital Passports That Confirm Your Vaccination Status Are Coming

Dr. Birx says Americans who gathered at Thanksgiving need to assume they’re infected with COVID-19, get tested this week

‘We won’t force vaccine; but you won’t be able to buy, sell or trade without it”

NTEB RADIO BIBLE STUDY: Jesus Says That When Jonah Died In The Whale’s Belly It Was A Picture Of His Own 3-Day Trip To Hell In The Heart Of The Earth

Running Out of Time | Rapture Forums

NTEB HOUSE CHURCH SUNDAY MORNING SERVICE: Jesus Did Not Only Bear Our Sin On The Cross At Calvary But He Became Sin For Us In Hell

Standing In The Way | Rapture Forums